Klikk her for norsk versjon.

Right across the sound from our summer house in Sjernarøy, you find Ramsvig . It used to be a trading station and general store (since 1787!), where my father in law used to row over to get groceries and sundries as a kid. It was closed down and empty for years, until a Stavanger couple bought it in the 90’s and then  fixed it up. They turned it into a beautiful top of the line conference center, restaurant and gallery. Earlier this spring they were awarded Olavsrosa (the Olav Rose) from the Norwegian Cultural Heritage foundation for their efforts. 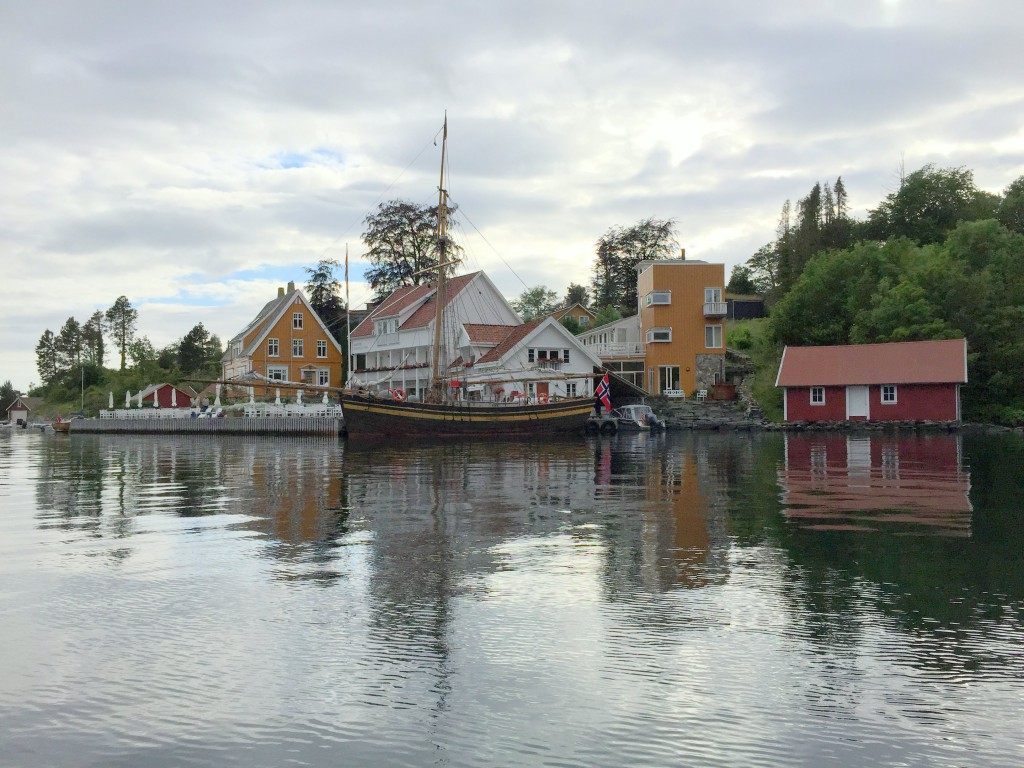 In the beginning of July I noticed that an old sailing ship was tied up by their dock. I mentioned to Johannes that I suspected it might be the ‘Restauration’. One evening a few days later we drove our boat over to have a look, and I was right. It was Restauration! 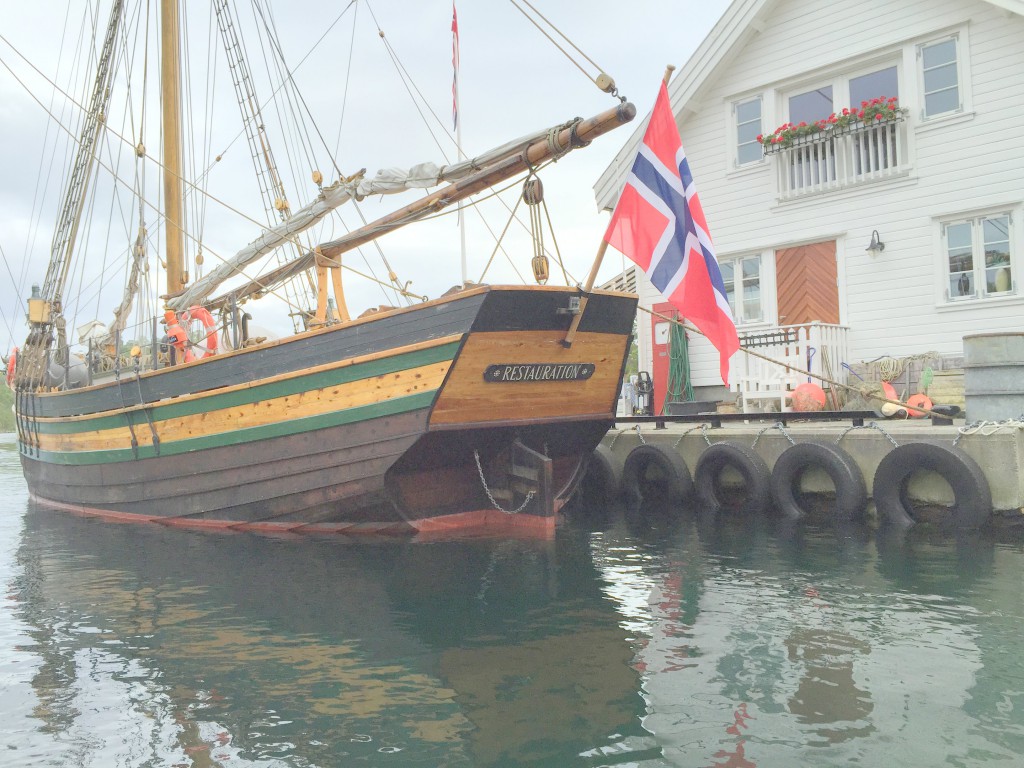 Normally this boat is stationed on the nearby island Finnøy, and I had seen it there before. But now it was just a few hundred yards away from our summer house! Why so excited? Well. The journey that Restauration took from Stavanger to New York in 1825 is considered the start of the Norwegian immigration to America! Restauration is like Norway’s equivalent of the Mayflower! More than 800.000 Norwegians immigrated to America over the next 100 years. There are more ‘Norwegians’ in America, than there are in Norway!

Ok. This isn’t the actual boat. But it is an exact replica, built by enthusiasts, and completed in 2010. Still. The story is fascinating.

The ship was originally built in Hardanger in 1801, og was first named ‘Emmanuel’. It was later modified, and was given the name ‘Restauration.

The ship set sail from from Stavanger on the 4th of July 1825 and arrived in New York three months later, on the 9th of October, after a strenuous journey. The boat was about approximately 39 tons, 54 feet long and 16 feet wide. There were 52 people aboard, mostly quakers and dissenters. The captain of the boat and the leader of the travellers was Lars Larsen Geilane. During the trip, his wife Martha gave birth to a baby  girl who was named  Margaret Allen, after a famous English quaker woman. The travellers were met in New York by Cleng Peerson, and settled by the Ontario lake in the Kendall township of New York State.

This journey was the start of a massive Norwegian immigration to the United States of America.  (source: Wikipedia)

The boat is not big. Looking at it  now, you can imagine that maybe 10 people could travel comfortably for a couple of weeks. But not 52 people, and not for three months! 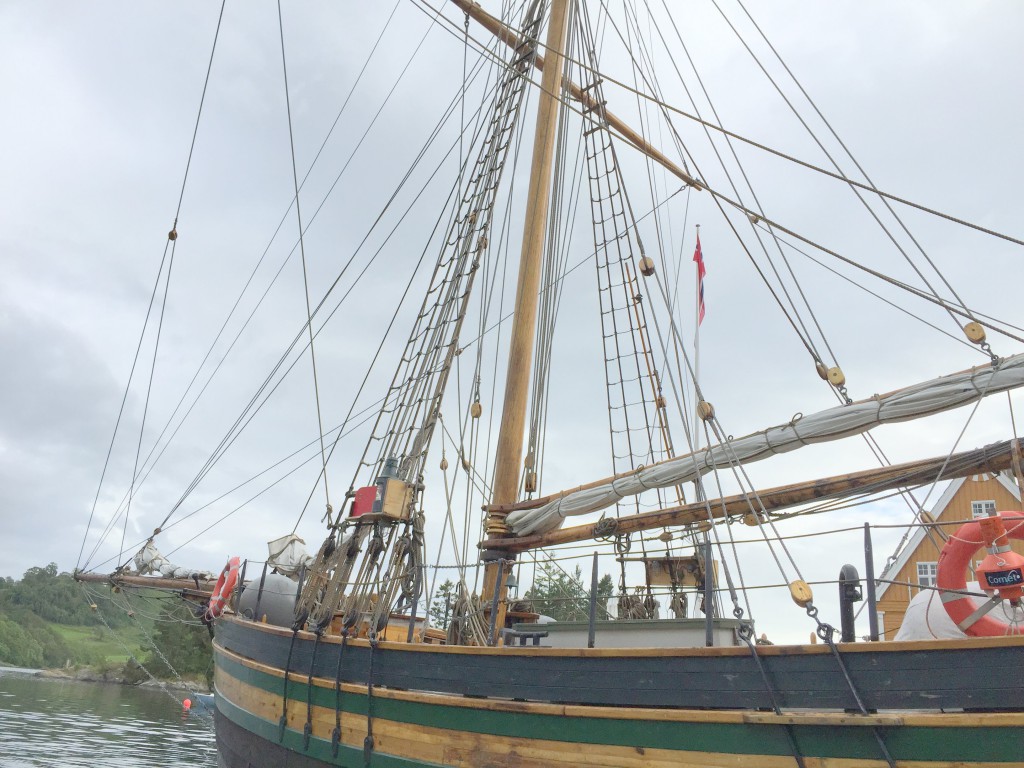 A few years ago I attended a lecture about our church’s history in Norway. (We know lots about church history in the US, but not so much about our local history.) Rolf Torjesen, who gave the lecture, told us that of that group of those first 52 immigrants on board the Restauration, several of them ended up in Fox River, Illinois, where they joined the mormon church. Later they were among the saints who travelled west from Nauvoo. I have always been told that the first Norwegian members were those who were baptized in the south of Norway in 1851 – but in reality the first ones were those who left Stavanger in 1825!

Right up until about 1960 it was common for new converts in Norway to immigrate to the USA, to strengthen the church there. So the church in Norway is both old and young at the same time. Old, because we have been in existence and functioning in Norway since 1851, but young, since most of the current Norwegian members can only trace their family’s membership in the church back more than two or three generations.

(A lot of the young american missionaries who now come to Norway, have Norwegian ancestors)

I find it interesting and amusing how the boat’s name was first Emmanuel, and then Restauration.

Emmanuel. In hebrew it means ‘God is with us’, and in the old testament it was the name used for the promised Messiah.

Restauration, or Restoration – means to restore something or return it to it’s original state. The church of Jesus Christ claims that it is the restored original church on earth today, and that the restoration  was necessary due to the warned apostacy that took place during the first centuries after the death and resurrection of Christ.

A coincidence? I don’t think so.